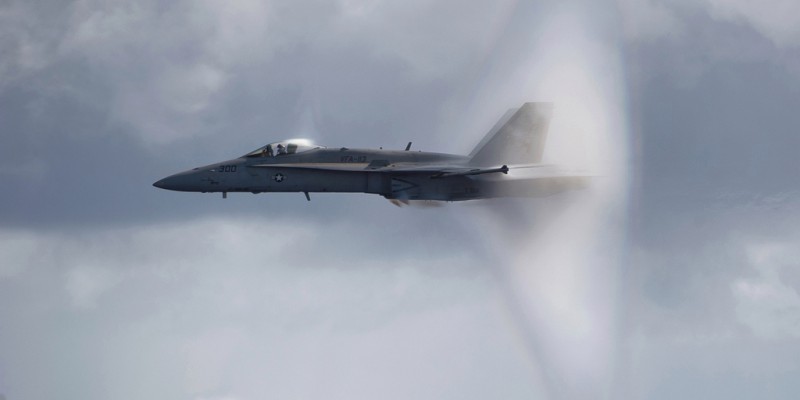 Humans have been fascinated with speed for ages. One of the most important achievements in this race for speed was the breaking of the sound barrier. Not long after the first flights in the early 20th century, several pilots tried to break the sound barrier and fly supersonic, but have come accross the obstacle of air resistance with tragic results, in some cases. The first pilot who actually made it, was American Chuck Yeager, in 1947.

This is how a race between the US, Europe and the former Soviet Union, to build the first supersonic airplane has started. The Concorde, an Anglo-French cooperation result, began making transatlantic flights in 1976, travelling twice faster than the speed of sound. However, it stopped flying in 2003 because it was unprofitable. The supersonic Tu-144, created by the Soviet Union, only flew for a few years.

However, supersonic airplanes have a serious drawback: when they fly faster than the speed of the sound they produce, they create shock waves that reach the Earth sounding like sonic blasts known as the “sonic booms”.  These noises can cause distress to people and animals and even damage buildings. They are the main reason why the supersonic flights programme was cancelled in the US in 1971. From 1973 until today supersonic flights are not allowed over land.

Scientists all around the world are studying the sonic booms for decades, trying to predict their route in the atmosphere, where they land and how loud they will be, in order to manage to confine them.

To understand how sonic booms are created we have to start from the basics. What do you notice when you toss a pebble in a quiet pont? The disturbance of the water from the pebble is transferred in little waves that form circles that grow bigger. These circles are called wavefronts. Similarly, although we cannot see this,, an audio source, such as your mobile, disrupts the air around it, creating sound waves that reach your ear so that you can hear it. Wavefronts are spheres growing, one inside the other. Sound travels on “sound beams” just as light travels on rays but it’s about one million times slower – this is why we see lightning first and then we hear the thunder. The speed of sound changes depending on the altitude, the air temperature etc.. At sea level it is about 1225 km / h.

Now think about an airplane which is a moving sound source. As the airplane travels slower than the sound it produces, the wavefronts are gathered at the front of the plane, but are still inside one another. When the airplane moves supersonic this changes. The plane moves faster than the sound it produces and all waves gather in a cone at the rear of the plane, creating powerful shock waves that reach the ground. Simulations based on mathematical models on a computer are using the above principles of sonic booms to adjust airplane routes accordingly.

However, sonic booms are not only created by supersonic airplanes! They are produced by any object moving faster than the speed of sound – such as spacecrafts, whips and bullets. It is believed that even some dinosaurs were creating sonic blasts moving their tails very quicklly  in order to scare their opponents!

Come along to the Café Scientifique with Katerina Kaouri on 21/3, at 18.00 and discuss this further!