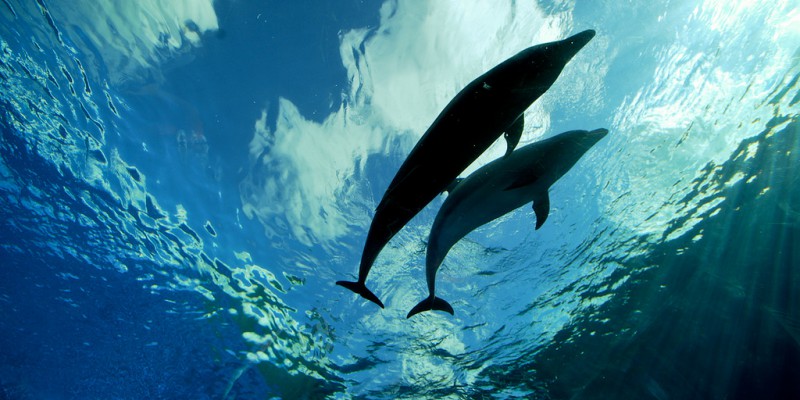 The dolphins of Greek seas

It has happened to everyone: you are at the bow of the ship, gazing at the sea, and suddenly everybody screams surprised “Dolphin! Dolphin!”, whilst trying to take a photo of its amazing jumps.

Did you ever wondered, though, for the origin of these fascinating mammals? They do not come to visit us from any ocean far away. In fact, we visit them, since dolphins are permanent residents of the Mediterranean and, in specific, they live in the greek seas. In a ship heading to Corfu, a little girl once asked me “What’s the name of the dolphin?”, and I responded “Dolphin”! However, at the same time it occurred to me that there are definitely many different and distinct species of dolphins.

There are five species of dolphins in the Hellenic seas:  the bottlenose dolphin, Risso’s dolphin, the striped dolphin, Cuvier’s beaked whale and the short-beaked common dolphin. Let’s meet them.

The bottlenose dolphin swims with a speed of over 30km/hour, and it is the most well known and communicative dolphin. It lives near the coast but avoids the boats since fishermen are not very friendly to it, because of the frequent entagling with their nets that ruins their catch. They prefer the coastal regions, and you might meet them in the Ambracian bay, since they are the only dolphins living there.

At birth, it has a seamless gray colored body. This color doesn’t last long, since after the first social interactions of the youngster, the teeth of other dolphins leave linear scars on its body, possibly maintained for the rest of its life. This is the biggest and scarcest dolphin residing in the greek seas. Risso’s dolphin lives in the open sea.
In Greece, we come across Risso’s dolphins in Myrtoon Sea, NW of Crete, in the island complex of Sporades and in Chalkidiki.

The black, thin line or “stripe” that begins from the eye, forms a small upward curve and heads to the genital area is the most distinctive characteristic of the striped dolphin. Laterally, you can see three stripes along the animal’s body. In Greece, striped dolphins live in several regions that are relatively close to the coast and have deep waters, such as Northern Sporades and Southern Crete, whilst its cohabitation with common dolphins and Risso’s dolphins it’s an unprecedented worldwide phenomenon. The striped dolphin lives in great depths (200m) and one can see herds following the ships.

The common dolphin is multicolored, with yellow-beige, black, white and grey colors forming an “hourglass” or an X shape when crossed in the middle of the body, or a V shape in case the lower part of the body is not visible. The common dolphin was once the most abundant dolphin species in Greece, but unfortunately it is currently threatened with extinction. It was actually named by Aristotle, since it was a very common dolphin in ancient years. It lives mainly in the Ionian Sea and it is rarely seen in Crete.

SKETCHES’ SOURCE: Webpage of the project “The dolphin’s route”