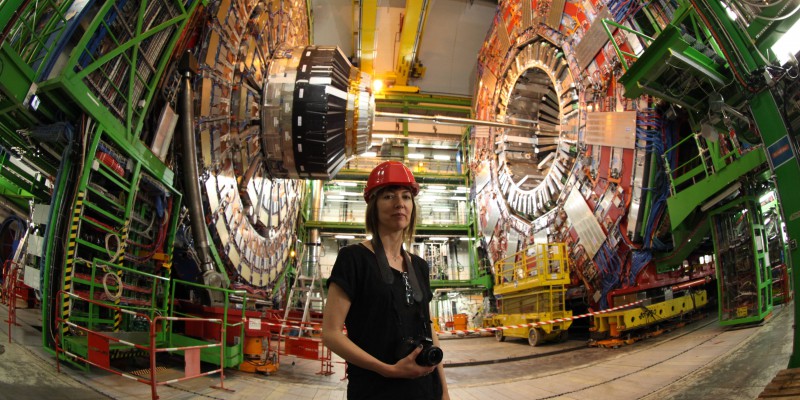 What would a CERN scientist and an artist have in common?

What is the interaction between the two fields and how does this interdisciplinary dialogue affect the way we see the world?

In recent years, especially after the discovery of the “elusive” Higgs boson in 2012 by the CMS and ATLAS experiments at CERN’s Large Hadron Collider, the wonderful world of particle physics has become even more topical, providing an ideal opportunity for us to reassess our understanding of our natural environment and our position in it. At CERN, the largest particle physics research center in the world, thousands of scientists are trying to answer three crucial questions: Where do we come from? Who are we? Where are we going?

However, these “mysterious” questions are not the exclusive domain of science, as they also provide inspiration to many artists. As Albert Einstein stressed out, «the most beautiful thing we can experience is the mysterious. This is the source of all true art and science. ”

“The world looks so different after learning of science.” Richard Feynman 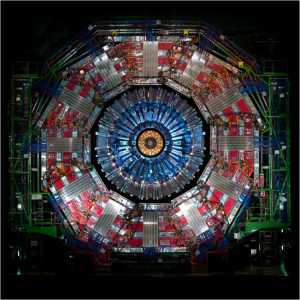 A cross section of the open CMS detector
Image Credit: Michael Hoch, Maximilien Brice © 2008 CERN, for the benefit of the CMS Collaboration

But what is beautiful in science? The experiential relationship with scientific thought and discovery is a common place for many researchers, and this is something that requires method, cooperation and perseverance as well as boldness and imagination. This way, the scientific process acts as a transformative experience that can not be complete without the essential dialogue between science and art. Through scientific illustration, creative collaborations and science communication, a new ground is born leaving behind the ‘limited’ boundaries of disciplines.

Modern particle physics overcome everybody’s innate intuitions, touching the realm of the “metaphysical.” This is the particular philosophy and spirituality that the arts are brought in to cover through creative narratives. Metaphors, similes and analogies, the actual tools of artistic creation, are also useful in the scientific process. Through these tools, scientists can imagine an abstract scientific concept in a more precise way, they can better understand the potential impact of this concept and are able to communicate the beauty of scientific thought to the wider community.

The [email protected] programme is all about this . It promotes the meaningful dialogue between science and art, bringing together scientists from the CMS experiment at CERN with artists from all around the world. At this year’s Athens Science Festival, visitors will have the opportunity to experience some tangible results of this dialogue.

The art exhibition ‘[email protected] l The art of science, the beauty in creation’ will present the works of five international artists using photo collage, painting and sculpture as a way to express the above questions. All creations were the result of collaboration and personal contact between artists and CMS experiment scientists. The short film “Past, Present, Future, Present,” which records the dialogue between the famous British theoretical physicist John Richard Ellis and Swiss artist Yuki Shiraishi will be screened during the festival. John Richard Ellis’ scientific knowledge responds to Yuki’s idea to create a large-scale construction that resembles a great ‘funnel’, a shape connected with our understanding of the universe. Finally, the audience will have the opportunity to talk with CERN scientists and other physicists who will introduce us to the secrets of the universe and the fascinating world of particle physics.

* Angelos Alexopoulos is a member of the communication team of the CMS experiment at CERN. He specialises in designing and implementing education & outreach projects. Christiana Kazakou is the art & science curator of the Athens Science Festival.

Photo: “British artist Allison Gill, one of the five artists participating in the [email protected] exhibition in the Athens Science Festival – in front of the CMS detector at CERN”. Image Credit: Michael Hoch