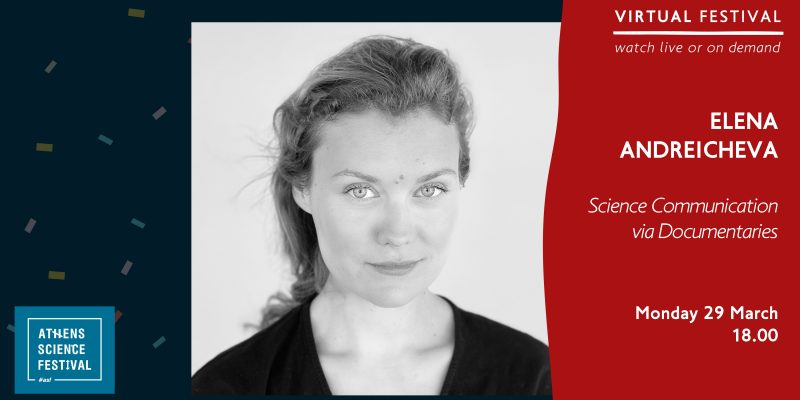 Award-winning British filmmaker, Elena Andreicheva and data journalist Thanasis Trompoukis discuss the role of documentaries as a mean to understand science and technology. How do these documentaries communicate science? Are some more effective than others at communicating the concepts and facts about science? How do documentaries balance the need for dramatic storytelling with factual content? How can they bring people closer not just to the science, but to the scientists, in an authentic way? Can documentaries be a very effective way to introduce yourself to new topics or to gain more depth in certain topics you may already be knowledgeable in? These are only few of the questions that Elena and Thanasis will try to answer during their discussion.

Elena Andreicheva is an Oscar and BAFTA-winning Producer and Filmmaker working across documentaries that fuse personal stories with powerful journalism. Born in Ukraine, she studied at Imperial College London (BSc Physics and MSc Science Communication) before sinking deep into filmmaking through jobs in TV production from 2006. She has produced work on hard-hitting and hard-access topics: incarceration (12-Year-Old Lifer), the war on drugs (Drugs Inc.), human trafficking (Saving The Cybersex Girls) and the Oscar -winning Learning to Skateboard in a Warzone (if you’re a girl). Elena’s directorial debut Polish Go Home looked at the immigration crisis in Britain through the eyes of a Polish family. She is currently directing a film for the BBC about a prodigious swimmer from the Gaza strip, and developing a slate of features.