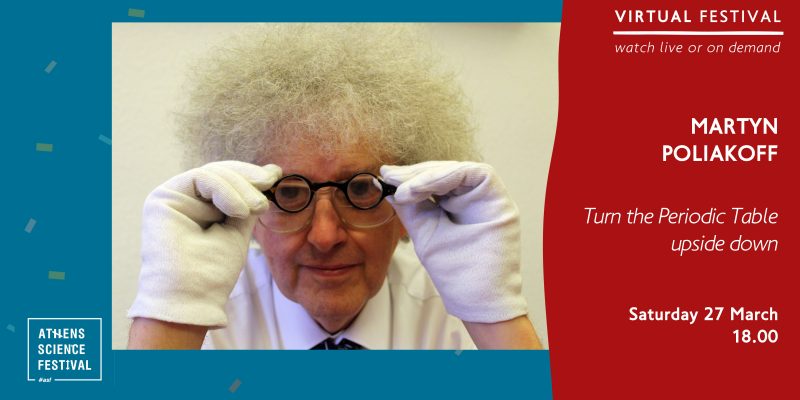 Could turning the periodic table on its head make some important aspects easier to understand and enthuse more people to study chemistry? Professor Sir Martyn Poliakoff believes that there is a better way of presenting this information to a new and in particular a young audience. In this discussion, we will explore how does looking at something from a new viewpoint gives rise to new ideas and create some new thinking. Also, Professor Poliakoff, a global leader in the field of green chemistry, will talk about how he was inspired to become a chemist and how he sees the field of green chemistry developing in the future. The discussion will be moderated by Stratos Asimellis (MSc in Chemisty, PhD cand. on Science Communication) and Helena Venardou (PhD in Chemistry, University of Nottingham, U.K. και QA-Product Compliance Manager & Qualified Person στη Boehringer Ingelheim Ellas)

Participants:
Martyn Poliakoff, Research professor in chemistry at the University of Nottingham (U.K)

Martyn Poliakoff is a global leader in the field of green chemistry with a specific interest in the applications of supercritical fluids. These highly compressed gases possess properties of gases and liquids that permit interesting chemical reactions without the need for organic solvents, which endanger both health and the environment. He is a Research Professor in Chemistry at the University of Nottingham, where he started as a Lecturer in Inorganic Chemistry in 1979.

His contributions have enabled the development of supercritical carbon dioxide and water solvent systems to replace traditional organic solvents at the industrial scale. Away from the lab, as Foreign Secretary and Vice-president of the Royal Society from 2011-16, he worked to represent and to further the impact of UK and Commonwealth science around the world. He has championed collaboration between chemists and chemical engineers. He is a Foreign Member of the Russian Academy of Sciences and Associate Fellow of the Ethiopian Academy of Sciences.

Martyn is widely recognised thanks to his participation in a series of YouTube videos, The Periodic Table of Videos. This popular science project introduces the general public to the chemical elements of the periodic table. He received a knighthood in 2015 — the culmination of his pursuit of excellence in research, his service as an ambassador for UK science and his public outreach work.