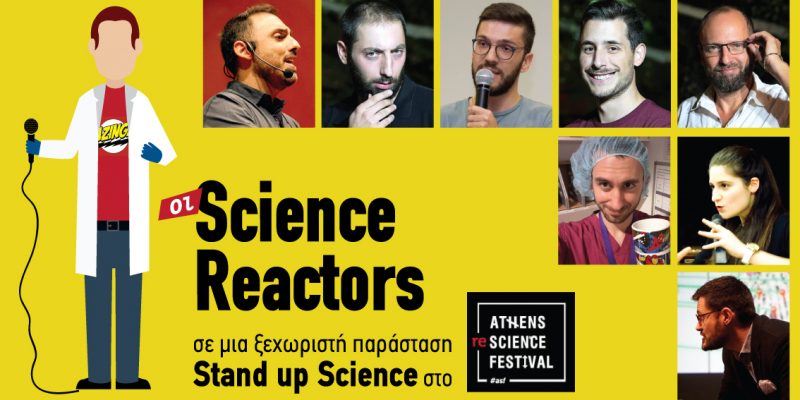 Do scientists have a sense of humour? How could we make everyday science concepts understandable? How science is combined with improvisation and comedy? In an effort to find these answers and to approach science in a different way, the Science Reactors get on the stage of the Athens Re-Science Festival to turn complicated science concepts in easy to understand stories. And more specifically, stories filled with humour!

The Science Reactors will present science stories with humour as they aspire to show that science can improve our lives with pleasant narratives. New scripts inspired by the Athens Re-Science Festival theme of a sustainable planet and of course re-thinking about the three basic concepts: re-use, recycle, reduce: Love that awakes our ecological consciousness, recycled misunderstandings, green growth for newbies, biodiversity as a fairy tale, “hot” climate change, arthropods and gynaecologists who promise to provide solution to the energy crisis, etc form this year’s performance.

The group consists of young scientists with high communication skills, but most importantly, with a passion for science. The team’s activities so far are: Science on Stage (science theatre) and Stand Up Science (in the footsteps of Stand-up comedy). Since 2014, they participate in all major scientific events.
ars engagement with Science Communication with the aim to cultivate the curiosity of the public about scientific issues that concern our everyday life and to offer incredible moments of laughter.

The Science Reactors consist of: