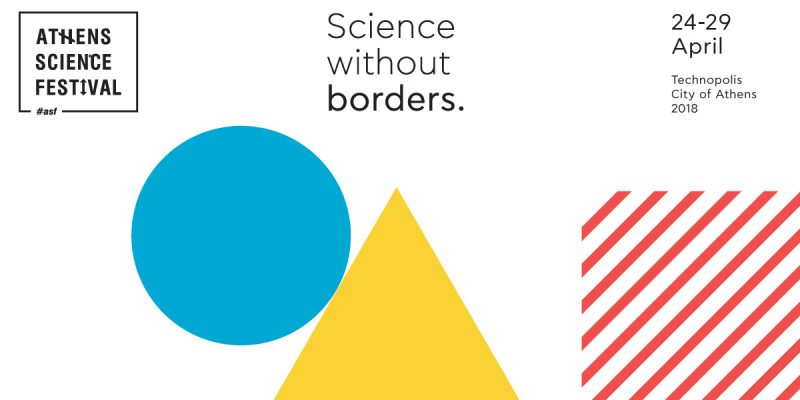 The Athens Science Festival returned to the Technopolis City of Athens from the 24th till the 29th of April 2018 to show that borders have no place in science.

– The Greek scientist who won the “German Nobel Prize” for pioneering an innovative method of visualising cancer cells.
– The biophysicist who helps us understand protein structure with the help of spaghetti.
– The researcher who links dark matter and super-symmetry to experimental rock and roll.
– The Lebanese scientist who continues his research in Greece, balancing between quantum biology and his love for perfumery.

These were only a few motives that Athens Science Festival visitors found to confirm that modern scientific research does not stop at the natural or artificial borders of countries. Science neither does it recognize boundaries between the various disciplines and specialisations, nor is it part of predetermined “conditions”. For this reason this year’s event was moving along the lines of “Science without Borders”.

Nowadays, scientific cooperation networks develop in interdisciplinary and transnational fashion, while large research facilities are raised off the ground to answer complex questions and solve human problems. Scientists from different disciplines, origins and nationalities come and work together without being interested in how they are limited as individuals as their only concern is to achieve their goals collectively.

The new trend in all levels of education is the unified teaching of multidisciplinary sciences with new methodologies and approaches. Students, as well as researchers and teachers are now moving more freely between nations, universities and disciplines. Findings of scientific research disseminate more quickly and without obstacles to the general public through the internet and social networks, from official channels and often from scientists and researchers themselves. Thus, complex and challenging concepts are expressed in simpler terms; they get popularized and reach more and more people in every corner of the planet.
Science does not stop at the doors of workshops and amphitheatres, but it merges with the arts and becomes even more accessible and entertaining, interchanging trends and data with modern pop culture, reaching out to even wider and more diverse audiences.

So science has no borders. Science concerns all citizens everywhere in the world, whether they work in it or just benefit from scientific achievements. During the Athens Science Festival, irrespective of age and status, all visitors had the opportunity to attend exciting talks and discussions by prominent Greek and foreign scientists, watch exhibitions and screenings as well as participate in workshops, fun educative games and many other events.

Athens Science Festival is organized by the educational organisation “Science Communication – SciCo”, the British Council, the Technopolis City of Athens, the Onassis Foundation Scholars’ Association and the General Secretariat for Research and Technology in collaboration with many academics, research and educational institutions.