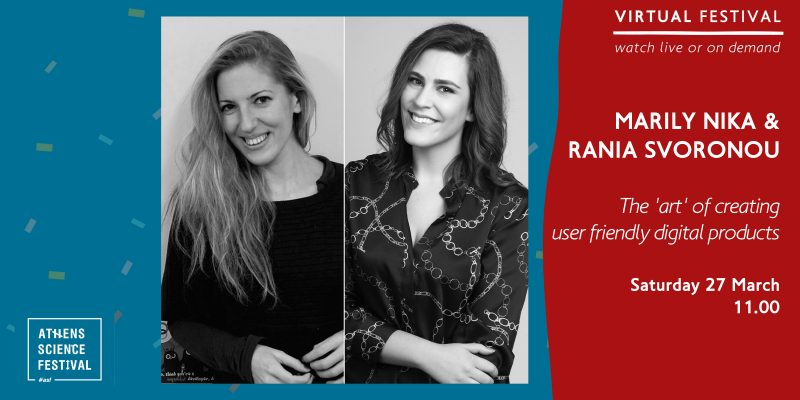 Have you ever wondered how the exciting and innovative technological applications we all use every day are designed?

Marily Nika, an AI Product Manager at Google, and Rania Svoronou, a Design Director at IBM, will join this year’s Athens Science Festival to reveal the techniques and way of thinking behind the conception, design, and implementation of well-known digital products that transform and make our everyday lives easier.

During their fascinating talk titled “The ‘art’ of creating user-friendly digital products” the well-acclaimed specialists in the field of technology will also discuss their professional paths so far, as well as some tips they would like to give to young men and women who want to follow similar careers.

Marily Nika was born in Athens and from an early age she was interested in programming. She is now based in the United States and works at Google headquarters in California, in the field of voice recognition of Google Smart Assistant. She also teaches technical product management at Harvard Business School. In 2018 she was named “Woman of the Year” at the Everywoman in Technology Awards in London, a competition that showcases the most dynamic and active women working in the STEM industry and in 2015 she received the “Influence” award from Princess Anna.

Rania Svoronou started as a graphic designer in Athens, studied and worked in London and is now a Design Director at IBM, Manhattan, New York, having already won the title of one of the women under 30 who determine the digital developments around the world. Rania has won numerous awards, including her in the list of Business Insider “top 40 rising stars of Madison Ave” where they innovate in the field of advertising. She holds an MSc in Interaction Design from the London College of Communication, University of the Arts London and a BSc in Graphic Design from Northumbria University, Newcastle Upon Tyne.